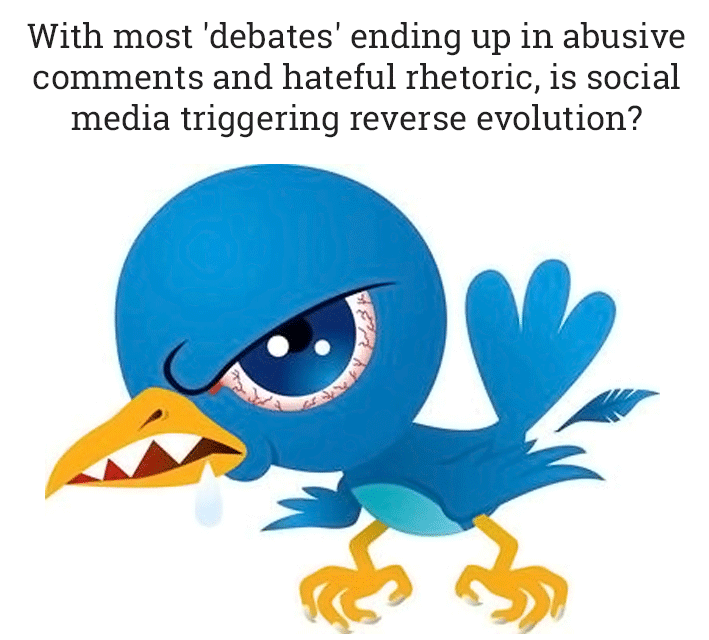 The birth of Social Media has changed the world. Everywhere you go, you see people staring at their devices, laughing, smiling & sometimes even crying. From a waiting area at an airport to the living room of your home, people are sitting together but they are with someone else. According to a global digital snapshot out of a total population of 7.3 billion there are 2.3 billion active social media users. The proponents of Social Media propagate that the world has come closer because of Social Media; it has become “a global village”. People have found new friends, connected with old ones; we have all become more social – hence the term Social Media. But is that really true? Has the world connected on an emotional level or a physical connection is all that we have. Has Social Media brought the world closer or has it been a catalyst in dividing the world. Has the world not become more hateful in recent times? Is this a coincidence or is there a link between global hatred and the advent of Social Media.

The day I started writing this piece the following were trending. Trump supporters cursing anti-Trump supporters & vice versa, Hilary supporters cursing Sanders & vice versa, Cops being abused after another Police brutality video, People for LGBT rights throwing verbal punches at those against it, Panama leaks and its fallout and the list goes on. By the time you read this, browse and see what’s trending and I am certain you will get the point before I even try to make my case. There were a few positive ones trending too like #DemocracySpring but then I read the negative comments and I decided to write this article. Facebook, the leader of the pack, has morphed into an online magazine rather than the social platform it started out to be. It has become a streaming service of trending videos that you share and comment on. The infamous ‘what’s on your mind’ update section has become redundant. Rather than saying what we love, we are now screaming more about what we hate. No wonder more millenials are opting for platforms that are more private. Facebook reminds them of their nagging parents.

I started my social media journey on platforms like Orkut and My Space about fifteen years ago, but my addiction came when I joined Facebook in 2006. This is the same time I was starting my business and being an anti-social introvert, I discovered that I could connect with prospective clients and showcase myself as a brand sitting in my room. I could give my expert opinion on a broad range of subjects and hence establish myself as an intellectual with an in-depth knowledge of advertising. Then twitter came and the realization that giving opinion is the new normal. If you don’t have an opinion you have no reason to exist, well at least on social media. The top metric marketers use to judge social media performance is through engagement. How many people have commented, liked, retweeted or shared your post. That’s how we judge ourselves too on Social Media. We like it when we see the reactions and the retweets. It puts a pressure on us to give opinions, which will generate more ‘engagement’. We all have become experts on religion, politics, sports, morals and whatever subject is trending. The irony is most of us are not experts at most of the things. Social media gives us an opportunity to project ourselves in a way that makes us more ‘likeable’. Hence the selfies and the quest for more likes and retweets. Everyone is in a race to prove that they are better than how they are perceived in real life. So whereas people maybe apprehensive about giving their opinions in real life, on Social Media they feel obligated to; especially since there is no fear of being challenged face to face & proven wrong. The engagement that gets marketers excited for social media mainly comes through nonsensical debates that we all love to participate in. To prove someone wrong is believed to be the best way to prove that you are better than the other person. So if half of the Social Media puts up a French flag to express solidarity with the victims of Paris attacks, the other half blames them for not putting up a flag for attacks in the Middle-east. The two sides argue for a few days but it doesn’t end, it only changes when another news read debate starts trending. Though our elders always told us that discussions are always healthy, there is hardly any brighter side to discussions on Social media. Most of them turn into ugly verbal brawls, ending up in abusive comments and hateful rhetoric.

I created Marketing Next the largest marketing forum on Facebook with around 15,000 members with the objective of having healthy discussions on topics of marketing. It became really hostile as it became the favorite spot of marketers to bash someone’s work. We feared we would lose members and the group will fade out, so we curtailed the bashing and started to steer the audience towards more positive discussions. In a week the engagement analytics fell dramatically, members started opting out and we started getting complaints that it has become too boring. We reverted back to insults and bashing and happy to report the analytics show great improvement. This trend holds true on a global scale, case in point, see the stories trending today and read the comments. There will be more hate than love. The hypothesis experts infer is that people are not real on Social Media but in fact are pseudo intellectuals. But what if people are real on Social Media and are pretending to be nice in real life. The animal instincts inside a typical human are curtailed by the presence of people & more importantly authority. There is no authority that scares you for calling a person infidel or a traitor or worse on Social media, whereas in real life you may not ‘dare’ to call someone that on their face. What if this crudeness is real and everything else is fake. What if humans are meant to have authoritative figures and would obliterate where there is a lack of a father figure. Hence the creation of over two thousand religions and over two thousand Gods that exist today to tell us what to do and how to behave. What if Social media is triggering reverse evolution, showing the true side of an intelligent life form and that mankind cannot exist as individuals and can only survive and flourish in the presence of a leader. Someone who can tell them what to say and when to stay silent. Someone like Harlan Ellison who said; “You are not entitled to your opinion. You are entitled to your informed opinion. No one is entitled to be ignorant.”

This entry was posted in Uncategorized. Bookmark the permalink.